Introduction: the infectious mononucleosis (IM) is a common disease in childhood. We propose to compare the white series of children with suspected IM, based on serology positive/negative for Epstein -Barr Virus (EBV), Cytomegalovirus (CMV) and Paul- Bunnell.

Material and methods: descriptive study. Children were reviewed, taken to hospital in 2010-2011, diagnosed with mononucleosis syndrome and positive serology for EBV or CMV, and equal number of children who were seronegative control group. Epidemiology, clinical and serological variables were compared .

Infectious mononucleosis (IM) is a systemic disease common in children and adolescents that is caused by the Epstein-Barr virus (EBV) and presents with suggestive symptoms and characteristic alterations in peripheral blood lymphocyte counts along with the presence of serum antibodies that agglutinate sheep red blood cells.1

EBV is a herpesvirus that replicates inside B lymphocytes and is the main causative agent of IM. However, besides EBV mononucleosis there are other clinical conditions with a similar presentation that are known as mononucleosis syndromes. They have a different and heterogeneous aetiology and may be secondary to infections by Toxoplasma gondii, rubella, cytomegalovirus (CMV), human immunodeficiency virus (HIV), adenovirus, etc.

Humans are the only reservoir for EBV and transmission occurs by interpersonal contact (kisses, saliva). The incubation period ranges between 14 to 50 days and its clinical features vary, primarily including fever, pharyngotonsillitis, lymphadenopathy, hepatosplenomegaly, atypical peripheral blood lymphocytes and the presence (at times) of heterophile antibodies. Exanthem develops on occasion, especially in patients that have received penicillin or any of its derivatives.2

In blood tests, white blood cell (WBC) counts reveal neutropaenia in 50% to 80% of patients, and the most characteristic feature of IM is the presence of polymorphic lymphocytes and monocytes. The presence of heterophile antibodies, detected by means of the Paul-Bunnell test, is a key diagnostic finding. However, this test tends to give negative results in children younger than five years, so an anti-EBV antibody test should be ordered in these patients. Both the Paul-Bunnell and the anti-VEB antibody test are negative in patients with mononucleosis syndromes.2,3

In our laboratory, when we order serology tests for IM, anti-EBV antibody, anti-CVM antibody and heterophile antibody tests are included routinely. So we decided to assess whether the WBC count of children with suspected IM varies with the positive or negative serology results for anti-EBV, anti-CMV and heterophile antibodies to determine whether WBC values can guide the differential diagnosis.

We designed a descriptive cross-sectional study in which we reviewed the medical records of children that received care at the paediatric emergency department of the Hospital de Cabueñes (Gijón, Asturias, Spain) in 2010 and 2011, discharged with suspected IM and in whom serology tests subsequently confirmed the presence of EBV or CMV. The control group consisted of the same number of children with a suspected IM diagnosis at discharge but that had negative serology results.

The variables we compared between the two groups were age, sex, and the total counts of leukocytes, neutrophils, lymphocytes, monocytes, basophils and eosinophils, as well as the correlation between positive Paul-Bunnell and EBV serology test results.

We performed the statistical analysis with SPSS® 12.0. We did a descriptive analysis of age and sex, and compared both groups using Student’s t test and a bivariate analysis by means of the Χ2 test, defining statistical significance as P < .05.

The study included a total of 50 children with positive serology results for EBV or CMV, defined as the detection of immunoglobulin M (IgM) against EBV viral capsid antigen (VCA) by immunofluorescence assay, which can be used to identify a characteristic fluorescence pattern in infected cells. We also made a random selection of another 50 children in the order they visited the emergency department, assessed over the same time period as the other patients, that had a presentation suggestive of IM but negative serology results.

The age distribution was homogeneous across both samples. Thus, the overall mean age was 5.81 years; and mean age was 5.38 for children with negative serology and 6.24 years for children with positive serology. As for sex, of the 100 patients who had serology tests, 66 were male and 34 female. Of the 34 female, 22 tested positive for EBV, compared to 26 of the 66 males; thus, there were more EBV-positive girls than boys (Table 1). We did not find a correlation between sex and a positive CMV result, and no age had a statistically significant association with positive EBV and Paul-Bunnell test results.

Table 2 shows the mean values of the WBC count according to EVB serology test results. The mean number of neutrophils was higher in children with negative CMV serology test results than in children with positive results, a difference that was statistically significant. We did not find an association between the number of lymphocytes, monocytes, basophils and eosinophils and the results for CMV serology tests. Table 3 presents the values of the WBC counts in relation to negative and positive serology results for CMV. 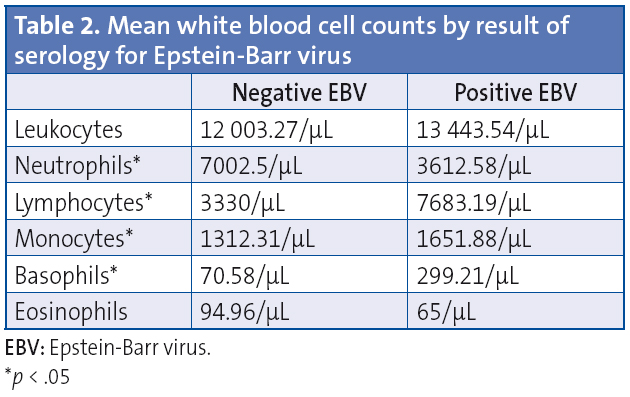 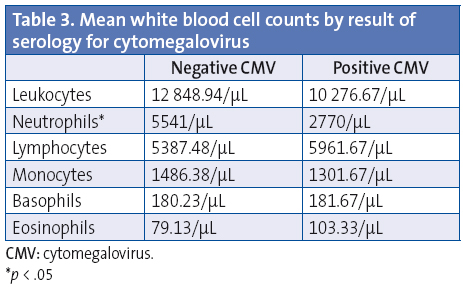 Improved economic and public health conditions have made infection by EBV less common in young children, making more adolescents susceptible. Thus, the incidence in children aged between five and nine years of age was estimated to be below 50% in 20064; with incidence peaking between 15 and 24 years of age. We found a mean age of five to six years, which was slightly low considering the data we just mentioned. However, our sample comes from the paediatric population, that is, the 0-to-13 year age group, which excludes adolescence. Nevertheless, it is important for us to know this disease, as its symptoms in young children are quite nonspecific.5 Some studies in the medical literature addressed this disease in young children. For instance, in 1995 Schaller et al published a case of IM in a two-year-old child.6 Later on, in 2010, Wan et alpublished three cases of EBV infection children of the same age.7

It is known that the presence of peripheral blood lymphocytosis with atypical lymphocytes supports a diagnosis of EBV infection.8 We set out to analyse not only the number of lymphocytes but also the values for the rest of the WBC count in relation to EVB and CMV as the aetiological agents. Thus, we found increased levels of lymphocytes, monocytes and basophils and a reduced neutrophil count in children with clinical features suggestive of IM and positive EBV serology test results. Children with positive serology tests for CMV did not have an abnormal number of lymphocytes, monocytes or basophils, and only had an elevated neutrophil count.

Most of the positive serology test results were for EBV, which is consistent with the literature, as EBV is the main causative agent of IM. In addition, all children that had a positive Paul-Bunnell test had positive serology results for EBV.1,2

We ought to highlight that we did not find an association between age and positive results in Paul-Bunnell and EBV serology tests. Yet the literature traditionally describes the heterophile antigen response in relation to age; thus, the probability of having positive results in the Paul-Bunnell test increases with the child’s age.9 It is believed that the test detects 80% to 90% of EBV infectious mononucleosis cases in children older than 10 years, while this percentage drops to 50% in younger children.10 The data from our study does not allow us to explain this result, but we find it interesting and perhaps worth studying further.

Increased lymphocytes, monocytes and basophils are found more frequently in children with EBV mononucleosis. The reduction in neutrophils was the only abnormal laboratory result that we found in children with CMV mononucleosis. These WBC count values can guide our diagnostic impression in patients with clinical features suggestive of IM. A higher proportion of girls than boys tested positive for EBV. Every child that had a positive Paul-Bunnell test result also tested positive for EBV, and we found no association with age.

The authors have no conflicts to declare in relation to the preparation and publication of this article.