Objective: to study the prevalence of co-sleeping in in the families of children attending pediatric Primary Care consultations and its relation with a certain number of aspects of their upbringing.

Patients and methods: case-control study with assessment questionnaires. A total of 317 surveys were collected from parents of children between the ages of 6 and 24 months who belonged to two Primary Care consultations in Madrid-Spain. Children who practiced co-sleeping were considered as cases whereas those who did not were considered control group. The number of nocturnal awakenings, episodes of lower respiratory tract infection and the duration of exclusive or complementary breastfeeding have been used as outcome indicators.

Conclusions: the results indicate that co-sleeping favours breastfeeding and its extension through time. Nevertheless, it also favours children’s nocturnal awakening and increases the risk of lower respiratory infections. The low socioeconomic level of the families and tobacco smoking are factors that favour co-sleeping.

Sleep habits in children, including the practice of parents and children sleeping together, is closely associated with parenting styles, as is the case with breastfeeding.1

Co-sleeping is understood as the child sleeping habitually—that is, every night and for at least four hours—in the same surface as the adult caregiver. These caregivers are usually parents, but may also be other members of the family; the sleeping surface is usually the bed, but it can be an armchair or sofa, as there are many different sleeping arrangements.2

Co-sleeping (also known as bed-sharing) is an English neologism. In the XIX century, it was very common for European peasants to share a single bed for the entire family, and the separation of parents and children during sleep was associated with economic progress and a cultural shift in the perception of the relationship of the individual with prioritizing the development of individuality and autonomy in the child.3

On the other hand, co-sleeping continues to be a widespread practice in Eastern societies, where children are considered to be independent at birth and requiring integration in the family, so that co-sleeping is a means of socialisation.4

From an anthropological perspective, the separate sleeping of human infants is an evolutionary exception, as primates and mammals sleep in physical contact with their mothers after birth.5

At present, co-sleeping is being reintroduced in Western societies due to the influence of advocates of attachment parenting. This term was coined by William Sears, a paediatrician from the United States, and is an approach based on the principles of John Bowlby’s attachment theory according to which the secure attachment that forms through a warm, intimate, protective and continuous relationship between child and caregiver sets the foundations for the harmonious physical and psychological development of human beings.6

On the other hand, Western perspectives take into account the arguments of biomedical research, so there are detractors of co-sleeping, and paediatrics scientific societies generally do not recommend it unless it is practised under conditions that guarantee the maximum possible safety in the mother-child environment.7-9

The aim of our study was to determine the prevalence of co-sleeping in the families served by the paediatrics clinics in two urban health care centres in Madrid, and assess its association with breastfeeding, the incidence of lower respiratory tract infections and the frequency of nighttime wakings in the children under study.

We conducted a case-control study using data obtained through a survey. The survey was based on the Brief Infant Sleep Questionnaire (BISQ), a short sleep questionnaire for children aged 5 to 24 months, that we adapted with the addition of other variables in the final questionnaire (reliability: Cronbach α, 0.731 [P < .0001]; validity: confirmatory factorial analysis and item-test correlation coefficient).

The survey included 317 children aged 6 to 24 months that visited two paediatric clinics in two urban health care centres in Madrid (Spain). The total caseload assigned to these two clinics was of 2745 children, 563 of which were in the 0-to-2 years age band. A randomly selected sample of the families that made scheduled or on-demand visits between April and December of 2015 was invited to participate in the survey, and the final sample consisted of all that accepted. None refused to complete the questionnaire. We considered families that practised co-sleeping cases and families that did not controls, and defined co-sleeping as the child sleeping habitually with a caregiver on the same surface.

We collected data for the following variables: age and sex of children, age and country of origin of the father and mother, situation of the family taking into account whether the parents lived together or apart, educational attainment, household income level, parental smoking, duration of exclusive or mixed breastfeeding, age of child when co-sleeping was initiated and duration of co-sleeping, reason for co-sleeping, agreement of parents regarding co-sleeping, incidence of lower respiratory tract infections and number of nighttime wakings.

The outcome measures used in this study were the duration in months of both exclusive and mixed breastfeeding, the proportion of children that had more than 3 wakings per night, and the incidence of lower respiratory tract infections.

We performed the statistical analysis with the software SPSS® 15.0. We expressed basic quantitative data as mean and standard deviation (SD) and qualitative data as frequencies and percentages. We calculated 95% confidence intervals (CIs).

We performed a binary logistic regression multivariate analysis with backward elimination of variables until only those that were statistically significant were left in the model. 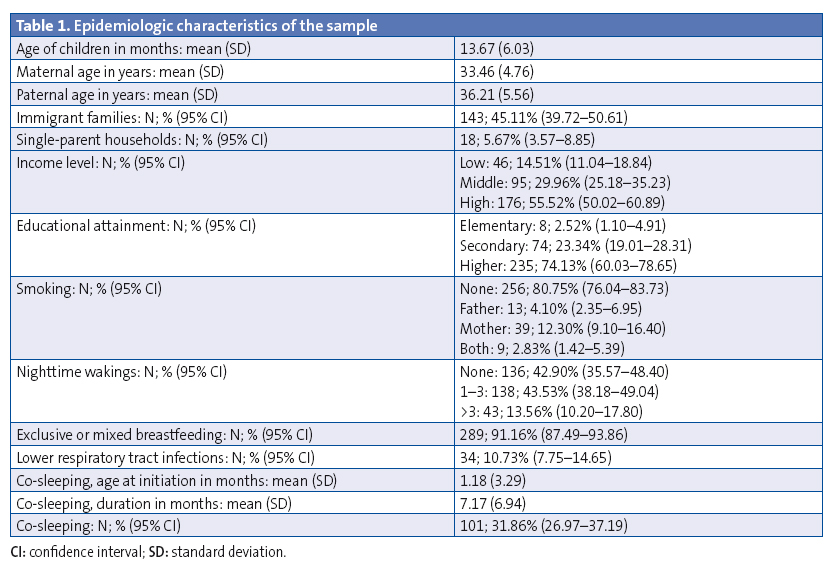 In our survey, 49.5% of parents reported they practised co-sleeping because they believed it beneficial, and in 97.50% of cases both partners were in agreement about this practice.

In the co-sleeping group, 98.01% of children were breastfed with a mean duration of exclusive breastfeeding of 5.03 months (SD, 2.56) and a mean 5.34 months of mixed breastfeeding (SD, 4.75), and 21.78% had more than 3 wakings per night. These results were statistically significant when compared to the control group (Table 2). Respiratory infections occurred in 16.83% of the children that co-slept, compared to 7.90% of children in the control group, a difference that was statistically significant (P = .020). In the multivariate analysis, the variables that continued to have a significant positive association with co-sleeping were exclusive and mixed breastfeeding, the number of nighttime wakings and smoking in one or both parents, while socioeconomic level emerged as a protective factor (Table 3).

Families usually approach childrearing with the knowledge acquired through personal experience, which in turn was moulded by the social and cultural values of the area where the lives of its members unfolded.10,11

How and where parents and children sleep shapes the parenting style and constitutes a very intimate aspect of family life. Furthermore, consultations about sleep ecology in children are frequent in primary care paediatrics clinics, and co-sleeping is a highly controversial subject in terms of its risks and benefits, a subject on which Horsley et al published an interesting systematic review.12

Despite the interest aroused by this subject, there are few studies on the prevalence of co-sleeping in Spain. In a study conducted in postpartum mothers, Roldán13 reported that 12% intended to co-sleep with their infants. López Pacios14 found a prevalence of co-sleeping of 8.6%, compared to the 31.86% found in our study, although his study was conducted in a considerably different geographic and social context. In our sample, 49.5% of parents chose to co-sleep because they believed it was beneficial for the family, with both partners agreeing on it in 97.50% of two-parent households that practiced co-sleeping.

Economic factors shape societies, and the habits developed by their members are influenced by their socioeconomic status;14 thus, we found a prevalence of co-sleeping of 50% in single-parent households and of 41.95% in immigrant families, a population that was amply represented in our sample, demonstrating that low socioeconomic status and smaller living quarters increase the likelihood of children sleeping in the same surface as parents.

Critics of co-sleeping consider that it poses a safety hazard and can be life-threatening to infants, with a significant association with sudden infant death syndrome (SIDS). There were no cases of SIDS in the period and population under study, but we could not assess this outcome due to our sample size, as the incidence of SIDS in Spain ranges between 0.15 and 0.23 deaths per 1000 live births.16-21 Clinical practice guidelines on paediatric sleep disorders underscore the importance of co-sleeping under safe conditions, and parental smoking has been identified as a risk factor. In 44.26% of our sample, at least one of the parents was a smoker, and more mothers smoked than did fathers; the medical literature also shows that the prevalence of smoking continues to be very high in women of childbearing age in Spain.22

We did not find any studies in the literature to compare our statistically significant finding of a higher incidence of lower respiratory tract infections in children that co-sleep with their parents compared to children with separate sleeping arrangements.

This physical proximity is advantageous when it comes to breastfeeding, as it is facilitated and maintained for longer periods in children that co-sleep, a point on which the literature is consistent.23-25 There is also an interesting study conducted in the Philippines26 that found that fathers that sleep close to their offspring have lower levels of testosterone, which may facilitate bonding.

The frequency of nighttime wakings in children that co-slept with parents was significantly higher than in children that slept alone, a finding was consistent with those of other studies.27-29 Many of the children under study, aged 6 to 24 months, continued breastfeeding, so the maintenance of breastfeeding could be associated with the increased frequency of nighttime wakings, which would not necessarily constitute a sleep disorder.

Thus, we can conclude that our results show that co-sleeping promotes breastfeeding, but on the other hand is associated with an increased likelihood of waking more than three times per night and an increased incidence of lower respiratory tract infections in children.

There are limitations to our study, chief of which is the small sample size, so it would be advisable to continue investigating this subject with larger samples. Furthermore, we think that it is important for health care providers to have a thorough knowledge of this subject30-32 to be able to educate families without the interference of personal bias, as it would not be professional to allow ourselves to be influenced by theories that fit our own beliefs; parents are ultimately responsible for making the decision, assisted by the information provided by the paediatrician.

The authors have no conflicts of interest to declare in relation with the preparation and publication of this article.