Introduction: acute pharyngitis caused by Streptococcus pyogenes is one of the most common diagnoses in pediatrics. To identify a clinical streptoccoccal acute pharyngitis, some predictive clinical scales have been proposed (Centor, Centor modified by McIsaac), but for the etiologic diagnosis, the use of the rapid antigen detection test for streptococcus is recommended. This test has a high sensitivity and specificity and it is easy to apply. Our study aims to determine the use of rapid antigen detection test in pediatric Primary Care in our area of influence.

Results: 12,678 episodes of streptococcal acute pharyngitis have been studied in 10,276 patients. 1274 (10.05%) rapid antigen detection tests were performed. Of them, 47.02% were positive. The modified Centor score was recorded in 1240 patients (9.78%); 6933 patients (53.81%) received antibiotic treatment. 89.67% of these patients had not undergone rapid antigen detection test. Amoxicillin was the most widely used antibiotic.

Conclusions: we evidenced a low use of rapid antigen detection test and a low register of Centor score. It has been observed an overuse of antibiotics, but the antibiotic used follow the recommendations of the treatment guidelines.

Acute pharyngitis (AP) is an inflammatory process affecting the mucosa and structures of the pharynx and tonsils. Its characteristic clinical manifestations are fever, odynophagia and tonsillar hypertrophy accompanied by erythema, oedema, discharge, ulcers or vesicles.

Streptococcal AP is one of the most frequent diagnoses in primary care (PC) paediatrics and the leading cause of antimicrobial use worldwide. However, most cases of AP have a viral aetiology and it is believed that only approximately 15% of the total cases diagnosed in children are caused by Streptococcus, a percentage that can rise to up to 30% during outbreaks.1 The identification of Streptococcus pyogenes as the aetiological agent of AP is important on account of the potential complications that it may cause:  suppurative complications (1%–2%) such as otitis media, acute sinusitis, peritonsillar abscess, mastoiditis or retropharyngeal abscess; and nonsuppurative complications such as rheumatic fever, post-streptococcal glomerulonephritis or reactive arthritis. The use of antimicrobial therapy to treat streptococcal AP and prevent these complications is currently under debate. A review of the different clinical practice guidelines for its management performed by García Vera et al2 for the Working Group on Infectious Diseases of the Asociación Española de Pediatría de Atención Primaria (Spanish Association of Primary Care Paediatrics [AEPap]) found that two of the guidelines (NICE, SIGN)3,4  stated that cases of streptococcal pharyngitis did not require treatment unless they caused significant symptoms in the patient, while the others recommended making an aetiological diagnosis and treating infections identified as being caused by Streptococcus with antimicrobial agents.1,5-9

The clinical manifestations and the findings of the physical examination contribute little to the differentiation of streptococcal AP from pharyngitis of other aetiologies, as there is no isolated symptom with a positive likelihood ratio for the probability of streptococcal AP exceeding 0.5. Some authors have developed clinical prediction scales (Centor score and Centor score modified by McIsaac) (Table 1), but they have a predictive value of at most 62%. Consequently, these scales should be used to select patients eligible for diagnostic testing, rather than to make an aetiological diagnosis.2,10-14

The gold standard for the diagnosis of streptococcal AP is a throat swab culture. This method has a sensitivity of 90 to 95% and a specificity of 99%, but also the drawback that results cannot be obtained in at least 48 hours. Rapid diagnostic tests (RDTs) based on the detection of specific carbohydrate antigens from the cell wall of Streptococcus pyogenes started being developed in the 1980s. At first, these tests had a high sensitivity and a low specificity, but in recent years methods based on enzyme and optical immunoassay techniques have been developed that are about as accurate as culture (sensitivity, 99%; specificity, 95-99%). These techniques have the advantage of yielding results within 5 to 10 minutes at a low cost (2.67 euro/test).2,11-13

Furthermore, recent studies have demonstrated that the use of RDTs reduces antimicrobial use by up to 42%.11-13

For the past 2 years, the rapid test for the aetiological diagnosis of streptococcal AP has been available in the PC paediatrics clinics of centres managed by the Institut Català de la Salut. The aim of our study was to assess the use of this test after its generalised introduction in all PC paediatrics clinics in our catchment area.

We conducted a retrospective observational study on a population of 64 172 children aged 0 to 14 years that received care in the 32 primary health care centres managed by the Institut Català de la Salut in Central Catalonia.

Our analysis included every diagnosed case of pharyngotonsillitis, acute pharyngitis, acute tonsillitis and streptococcal tonsillitis documented in the electronic health records database from January 1, 2015 to January 31, 2016.

We have described normally distributed quantitative variables as mean and standard deviation, and dichotomous and ordinal variables as relative frequencies. We assessed the differences between results by calculating odds ratios (ORs) and their corresponding 95% confidence intervals, with a 95% confidence level and defining statistical significance as a p-value of less than 0.05 in the χ2 test.

We performed the statistical analysis with SPSS® version 18 and Epi Info® version 7. 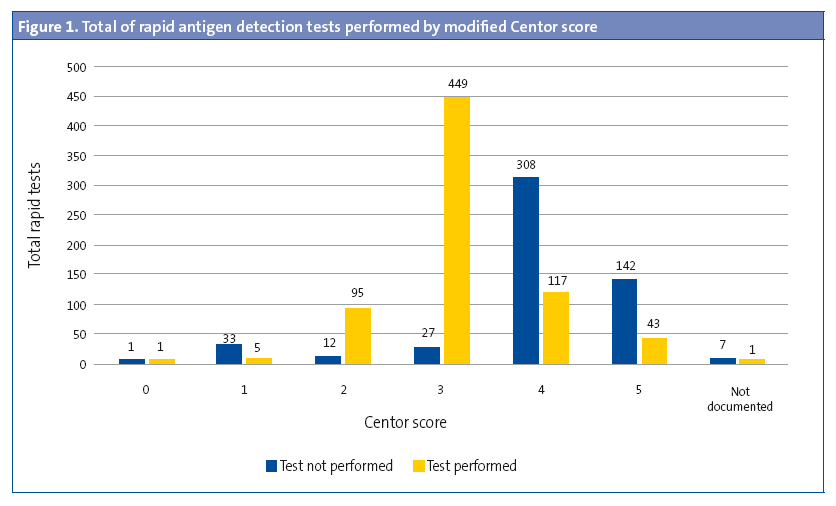 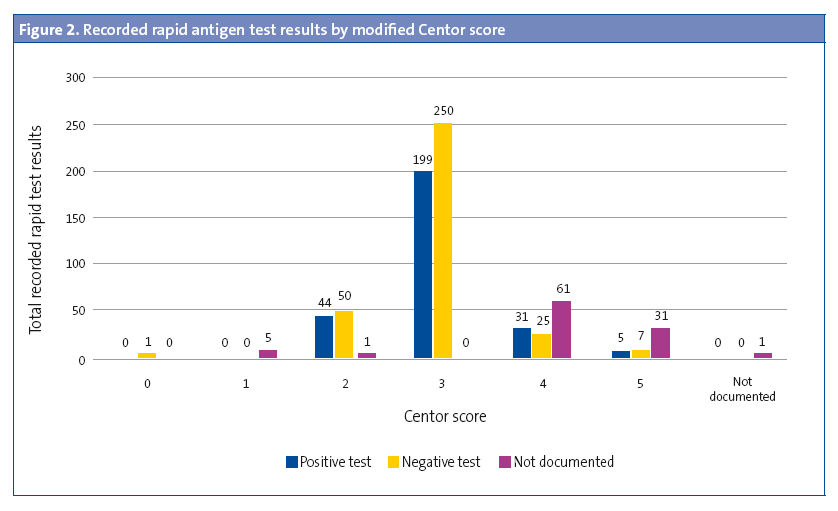 At present, there are many hospital-based studies on the diagnosis and management of streptococcal AP in the literature, but few studies have been conducted in primary care settings. In our study, we found that the use of the RDT was low following its universal introduction in all paediatric PC clinics in our catchment area (it was only used in 10.05% of diagnosed cases). This may reflect that paediatricians in our catchment area continue to use clinical as opposed to aetiological criteria for the diagnosis of streptococcal AP. The mean age of diagnosis (6 years and 11 months) was consistent with the previous literature, as was the predominance of viral AP in children aged less than 3 years (results were positive in 27.3% of tests performed in children aged < 3 years).1-14 This predominance may explain why RDTs were only performed in 5.3% of children in this age group. Routinely performing the test in children aged less than 3 years would not be cost-effective when the initial clinical suspicion is of a viral AP.

We observed that the modified Centor scale was documented in a low proportion of cases (9.78%). This could be due to the heavy workloads of PC paediatricians, who may have used the scale but neglected to enter the score in the records to tend to patients quicker. Another possible explanation for this finding is that, as we already mentioned, paediatricians may use their clinical judgment directly without using any scale for diagnostic prediction. Either way, this could be an interesting aspect for further research.

Approximately half of the RDTs performed had positive results. This proportion was maintained in cases with scores of 4 and 5 in which rapid testing had been performed, and we found no significant differences when we compared the RDT results (positive/negative) with the corresponding modified Centor scores. We find these findings relevant because, while clinical scales have been developed for diagnostic prediction, they are, as stated in most of the literature, a mere approximation, and do not provide an accurate aetiological diagnosis.2,6,7,9-11,13-15. The literature has reported a maximum probability of accurate diagnostic prediction of 62%.2 Several cost-effectiveness studies demonstrate that performing RDTs in all patients with a score of 3 or greater is the most cost-effective approach.11,16,17 In spite of this evidence, in our study we observed that RDTs were not performed in 43.92% of the cases with scores of 3, 4 and 5, and that 95.69% of cases treated with antimicrobial agents without prior performance of a RDT corresponded to patients with a Centor score of 4 or 5, which suggests that clinicians tended to prescribe antimicrobials directly in patients with scores of 4 or 5, not ordering a RDT in most, so that the clinical scale was used as a tool for therapeutic decision-making. In 57.5% of cases with a modified Centor score of 4 or 5, results of rapid testing were not entered in the records, and were coded as “testing is not indicated”. This shows that some paediatricians are still confused about the need for testing in patients with high Centor scores.

We must raise awareness among paediatricians of the usefulness of performing a RDT in cases with manifestations suggestive of pharyngitis. We found that rapid tests were used in few cases. There is ample evidence that the correlation of diagnostic prediction scales and clinical scales with microbiological confirmation, even when these scales are used by experienced paediatricians, is weak. The purpose of using RDTs is to achieve an accurate diagnosis and to reduce the indiscriminate use of antimicrobials and the associated health care costs.

In light of the findings of this study and of the reviewed literature, we would recommend the implementation of an active campaign to raise the awareness of paediatricians regarding the use of RDTs in PC centres in our catchment area, to be followed by studies conducted to verify that the test is used appropriately.

The authors have no conflicts of interest to declare in relation to the preparation and publication of this article.