Familia y Salud website as a vehicle for health promotion in children, families and adolescents

Objective: to analyze the flow of communication generated by the web Familia y Salud from the beginning, in April 2012.

Methodology: we have analyzed Google Analytics, a statistical program added to the web: number of views, users, duration of the session, bounce rate, socio-demographic profile, most popular articles and satisfaction.

Results: we observed a significant increase in the number of visits, users and followers in the last year, with a high level of satisfaction. We received many visits from Spanish speaking countries.

Information and communication technologies have become a potential vehicle for health promotion, especially in paediatrics.1,2 Many forms of online publishing can be used to share information, including well-known ones (electronic mail, electronic mailing lists, websites, etc) and newer forms (such as the very popular blogs and social networks), with more to come. This new way of using the web has been labelled web 2.0 (social web) and is an established reality.3

The number of individuals that search health information keeps growing, and they demand this type of media to search for information or interact with other patients, institutions or professionals.4,5 There is also an increasing number of health professionals that see this new mode of communication as a professional tool that can be used to improve our knowledge, our research or the care we offer patients.6-8

The Familia y Salud (Family and Health) website has information that is updated periodically (texts, podcasts, videos, links, images) and of great scientific rigour, aimed at professionals, caregivers, children and adolescents. Although it offers the possibility of interacting by means of comments and opinions, its purpose is not to provide medical services nor replace face-to-face health services. To optimise its use, its contents have been divided into various sections by means of cascading style sheets:

It also offers other services such as registration, by which users can more easily access the contents they are interested in and can periodically receive a newsletter, and extensive social media integration (Twitter® and Facebook®) that facilitates the daily diffusion of new contents.

Studied material: articles and news written by more than 230 paediatricians and other professionals.

Review method: we analysed the data collected by the Google Analytics® web service, which can be used to learn how users interact with the web. We also analysed the results of an online, voluntary satisfaction survey about the contents of the website.

Number of sessions and users

The total number of pages viewed was approximately 6.5 million, and they were visited by more than four million users. Last year we received a little over 3.6 million visits from 2.47 million users. In the past month, there were approximately 10,000 sessions a day. We observed an increase in the number of sessions over the course of the three years that the website has been up, which was exponential in the past year (an increase in the number of sessions of more than 500%) (Figure 1). The number of pages viewed per session was 1.35.

The proportion of new users was 86.7% compared to 13.4% of users that previously used the site (Fig. 2). This means that more than half a million are returning users. 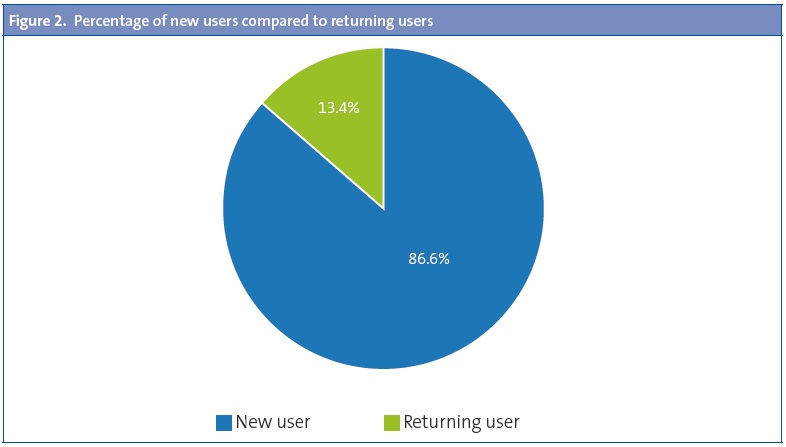 The number of sessions was lower during weekends (Saturday and Sunday) and higher during weekdays. The time of day with the heaviest traffic was from six to eleven pm.

The average session duration was 1.16 minutes. This trend has remained stable since the website was launched.

There is a clear decreasing trend: the mean bounce rate is 35.7%, while the rate has dropped to 15% in the last year. 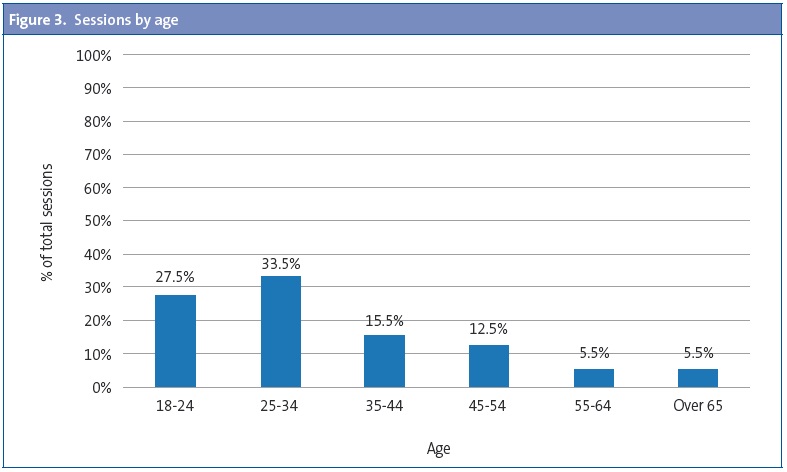 We received 100 responses for the online satisfaction survey. Overall, 56% of respondents found the website very useful, 40% useful, 4% hardly useful and none found it useless. When it came to specific contents, the section that the users found most interesting was Diseases, followed by Our concerns and Young Health (Figure 4). 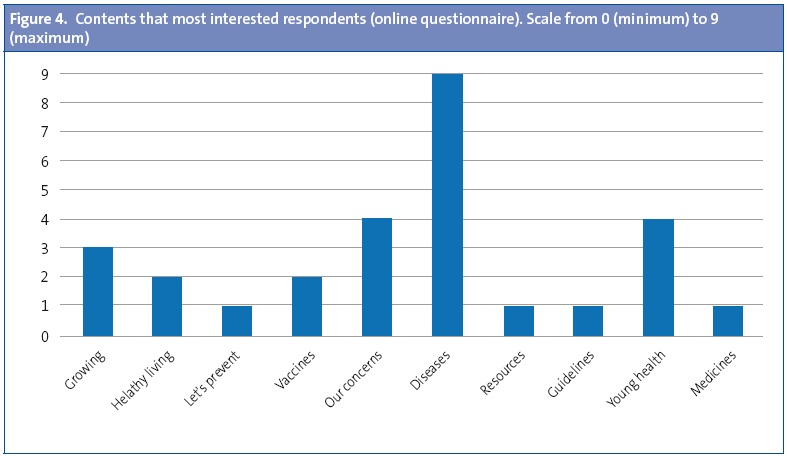 Let us start with an indisputable fact: three out of four individuals obtain health information from the Internet. In our clinical practise, we meet knowledgeable and empowered patients that search for information before and after meeting with us. The ascent of the Internet and the social networks in recent years has been spectacular.9

While at present there are numerous sources of information concerning children’s health, few studies have analysed their potential for communication6,10. Thus, it is difficult to compare our results with the findings of other studies.

There is considerable interest in Familia y Salud, as we receive a great number of visits every day (10 000 sessions/day), and the number of sessions and of new users have been increasing in recent months. About half a million users are returning users. This shows that the site is valued and sparks interest.

The average session duration is another indicator of how much interest a website attracts. A duration of more than one minute is considered very good. The average for a web exceeds that threshold. The worldwide average is 20 seconds. The assumption is that this is due to the existence of thousands of websites that do not have what the user is looking for, so that he or she leaves the page immediately after entering.

The bounce rate is the percentage of visitors who enter the site and then do not browse, but rather leave without reading any more because they are not interested. The higher the bounce rate the lower the Google® ranking, which results in poorer positioning. In our case, there is growing interest in the site, and the bounce rate keeps decreasing.

As expected for a paediatric website that targets families, users tended to be young, 18 to 34 years of age, and were both male and female, with no statistically significant differences. The younger the age, the greater the Internet use. According to data from published studies, 83% of young individuals use web browsers to search for health-related information.3 This percentage is higher than the percentage that visit the doctor (77%) or consult with a pharmacist (46%). However, it has also been reported that they find online information less reliable than the information obtained in a face-to-face visit. The reason for the more frequent search of information online is the greater accessibility, convenience and speed of the Internet.

As for users from abroad, most visits from outside of Spain came from Spanish-speaking regions (two out of three users), which makes Familia y Salud one of the major websites on paediatric health in the Spanish language. Internet is the highway of globalisation, distances are eliminated, information flows instantly, there is unlimited diffusion, access is ubiquitous.

The contents that most interested users had to do with health problems, especially dyslexia and vomiting. This demonstrates that searches for health information on the Internet usually had to do with diseases or other health complaints, and less often with preventive aspects related to nutrition, vaccination, healthy lifestyles and medication. These data are consistent with the study published by the Observatorio Nacional de las Telecomunicaciones y la Sociedad de la Información (ONTSI) and the publicly owned corporation Red.es.9 On the other hand, topics related to adolescent health, gathered in the section Young Health, occupy the fifth place, which is not bad considering that this is the smallest subset of the population and that adolescents require the least care in traditional settings.

A large percentage of the users that visited our website had used a browser to access the desired information. The following step was entering the name of the disease/complaint. Mobile phones were the platform used to access our website by three out of four users, followed in frequency by desktop computers.

The role played by social networks today cannot be overlooked.11 Our website takes advantage of their potential. With each passing day, Twitter®, Facebook® and other social networks grow in importance as a meeting point for exchanging information and are resources that are increasingly integrated into the site. They are evolving rapidly, and there is increasing interaction of the user with our website through social media.

The reported satisfaction with these types of online health-related tools is very high. In this case, 96% of users found the website useful or very useful, and the most valued section was the one devoted to Diseases.

The Internet is becoming a channel of communication where patients search for information in clear and accessible language, and share experiences. The emergence of these new forms of communication does not mean that all patients will use them, or that they will be fully empowered and active in the future and take on a greater responsibility in decision-making. It is possible that a large number of people will continue to prefer delegating the decisions concerning their health to health care professionals. There will also be others that will assume that responsibility and require different treatment.

The Familia y Salud website is becoming a powerful means of communication and health promotion in children and adolescents, a source for the diffusion of knowledge and shaping the health care culture.